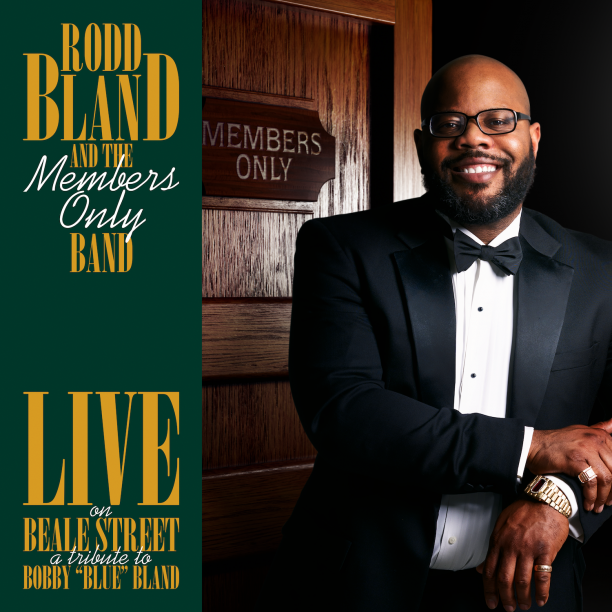 MEMPHIS, Tenn. - ncarol.com -- Nola Blue Records is pleased to announce the signing of a partnership deal with drummer and Blues legacy artist Rodd Bland. Stepping boldly into the spotlight as bandleader and ambassador of an illustrious musical legacy, Rodd Bland presents his debut release; a tribute to his father, Bobby "Blue" Bland.

Live on Beale Street: A Tribute to Bobby "Blue" Bland by Rodd Bland and the Members Only Band captures an electrifying performance live from the epicenter of his late father's emerging career: Beale Street. Each band member was hand-picked for the gig because in some way, shape, or fashion, they had played with Bland's father. Keyboardist Chris Stephenson, guitarist Harold Smith and bassist Jackie Clark, along with a tight three-piece horn section led by trumpeter Marc Franklin provide the music expertly anchored by Bland on drums. The all-star ensemble delivers a show stopping performance befitting the man The Rock and Roll Hall of Fame described as "second in stature only to B.B. King as a product of Memphis's Beale Street blues scene."

More on ncarol.com
A lifetime Memphis resident, Bland grew up in a musically rich home; his interest in drums beginning at 2-1/2 years old. By age 5, he was already performing with his father's 10-piece band. In the 1980s, Bland learned how to play with the discipline and regimen of a show drummer when playing one half of the double drummer setups, doing the lion's share of work on his performance skills by the time he was in his teens. At 19, he began to perform with his father as the sole drummer. Bland's first time playing drums on Beale with his father's band was at the New Daisy Theatre for the 1996 recording of the album Live on Beale Street. Now, twenty-five years later Bland continues the family Beale Street tradition, not just as a drummer but as a revered second-generation guardian of an influential musical legacy.

The six-track EP was recorded live at B.B. King's Blues Club on May 10, 2019 and is slated for July 16 release. The cover artwork itself is a loving homage to Bland's father; an updated version of the cover for Bobby "Blue" Bland's Billboard R&B album-charting release, Members Only (Malaco Records, 1985) designed by the innovative creative team at Street Savvy Unlimited. Bland is pictured wearing his father's first gold and diamond encrusted digital watch, which he was wearing on the original album cover.

More on ncarol.com
"Legacy projects are extremely near and dear to my heart," says Nola Blue Records president, Sallie Bengtson. "Similar to Rodd, Nola Blue's cornerstone artist, Benny Turner, carries an important musical legacy while also forging his own musical footprint. It is a distinct honor to work with artists and projects such as these."

Rodd Bland says, "I'm happy that I'm finally taking my place in paying tribute to my father's tremendous legacy of music, and look forward to ensuring I honor and protect his brand while building my own."