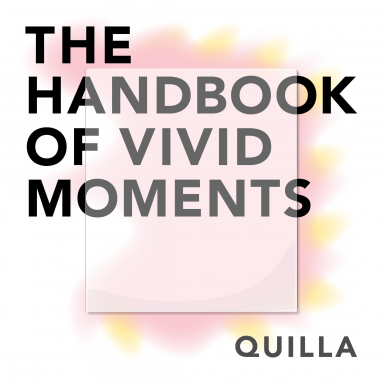 The seasoned and notable club hit vocalist releases her most personal and influential album yet.
GREENSBORO, N.C. - ncarol.com -- Quilla (Anna Luisa Daigneault), releases an eight-track electronic indie-pop album on her record label, Ritual Fire Records. Titled, "The Handbook of Vivid Moments" Quilla beautifully weaves elements of her Latinx heritage rhythms and dance floor beats. With the blending of heritage and music genres, this album is one to uplift listeners during what has been a difficult time worldwide and explore current themes that are often challenging to tackle. The album is available for immediate release upon all platforms here: https://orcd.co/quilla_handbook

When asked to describe her album, "My new songs are about personal transformation and women's empowerment in a dystopian age. I also include songs about climate change and migration, in an effort to examine these topics in a new light," Anna Luisa Daigneault. "This album will serve as a milestone of sorts. It will help me synthesize all the technical skills I have accumulated as a producer over the past decade. I aim to create an album that is fun to listen and dance to, as well as make people contemplate our current era. Despite the challenges we all face, I feel that the upbeat tone of this album will symbolize choosing hope over despair."

More on ncarol.com
Most recently, Quilla and her album were featured in Bit Rosie's latest short documentary as part of a series highlighting the work of women producers around the globe. Tracks from "The Handbook of Vivid Moments" have already been featured within the broadcast and film space. Algorithms with Benefits recently became the theme song for WUNC's new "Embodied" podcast, Boom Bada was featured on UNC-TV, and Sagittarius was part of a choreographed music video featured at five film festivals in 2019 and 2020, directed by Jennida Chase and Hassan Pitts.

This third album was solely written and produced by Quilla in her home studio and was created with support from the North Carolina Arts Council and the partnering arts councils of the Regional Artist Project Grant Program.

Bio:
Quilla (Anna Luisa Daigneault) is a vocalist, songwriter, and electronic music producer. Originally from Montreal, Canada she currently resides in Greensboro, NC. Known within the electronic music community as a versatile vocalist, she has written songs for Tiesto, Heatbeat, Sultan + Shepard, Feenixpawl, and many others. She was a featured vocalist on hit club tracks released by Universal, Revealed Recordings, Armada, Vicious, and Ministry of Sound. As an electronic producer, her work is inspired by house music, world beat, downtempo and experimental sounds. Her first album Beautiful Hybrid (2014) was featured by iTunes in their 'Ahead of the Curve' playlist. Quilla's second album You Got It (2017) included tracks ranging from cathartic to contemplative. A reviewer from I Want EDM noted, "her ability to transcend genres and tie all the brilliant intricacies of her production together is majestic." On September 14, 2020 Quilla's third album, "The Handbook of Vivid Moments" was officially released and distributed through Ritual Fire Records.